Owner Emeritus
#1
There are good people and good things everywhere in the world- if you see something share it here as a reminder of the good in the world that is so easy to overlook when things seem so bad ...

Sometimes I lose my faith in humanity because all you hear in the news is all the bad stories, but there are still lots of good people and good things in the world, so let's highlights them. Both the videos you posted are inspiring- thank you.

Forum Pro
#4
I too love this idea as it is all too easy to forget given all the news and happenings in the world...your videos brightened my day...

SF Artist
Staff Alumni
SF Supporter
#5
I came across this on You Tube and thought I'd share it. What a very kind man

I've always liked this short video and find it motivational. It reminds me of what we can achieve with perseverance and the correct attitude even when we make mistakes.

Thank you, and I hope you have a nice day.

I like this video. This is was an incredibly kind gesture by an extremely caring person. It's good to know that there is such great people in the world.


I hope you have a nice day.

While I'm on the topic of the kindness of waitresses, I thought I would serve you with this treat of generosity too.

While I'm on the topic of the kindness of waitresses, I thought I would serve you with this treat of generosity too.


Husky
Click to expand...
That is a great story Husky, thanks for sharing. Its actually brought tears to my eyes.

Have a great day.

Owner Emeritus
#13
Thanks @Kira - love the dolphin and animal stories in general. Animal rescue is one of my pet things sort of...

@Woowoo thanks for sharing- there are in fact so many good people- I still happen to believe for more good than bad just never hear about them.

Of dust and shadows

SF Creative
SF Supporter
#15
I read this article in the sport's section of saturday's The Guardian newspaper:

While many fans are used to having cash squeezed out of them, this Isthmian League club is putting supporters’ welfare first 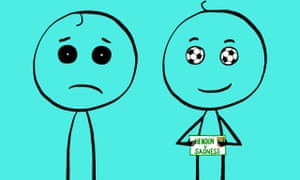 Hendon FC will reach out to fans by offering free tickets to anyone suffering from depression or loneliness.
It was still less than a week ago that an unusually emotional Champions League final featured a player from each side depart in tears before half-time and the losing goalkeeper, whose individual errors swung the game, report the following afternoon that he “hadn’t really slept” as “the scenes are running through my head again and again”.

Also last Saturday, Tom Cairney scored the only goal as he captained Fulham to victory in the Championship play-off final and declared his side’s promotion was “a dream come true. It feels incredible. It feels like an out-of-body feeling”. Meanwhile Steve Bruce, the manager of defeated Aston Villa, described “a feeling of utter disappointment for everybody”. “It was heartbreaking,” said their midfielder Josh Onomah, who had spent the season on loan from Tottenham. “I’ve got to get my head around the result. It was just so disappointing we lost.” John Terry cried on to the shoulder of Jack Grealish, said he was “absolutely devastated” and left the club within days.

Whether on the pitch or in the stands, sport has a particular ability to toy with the emotions of all involved with the violent unpredictability of a cat with a field mouse, with the chance of ending the experience feeling only metaphorically chewed up. It is no accident the phrase “emotional rollercoaster” has been used by British national newspapers in football reports precisely 400 times over the past decade, averaging one use in every week of every football season.

Hendon FC, who play at level seven of English football’s pyramid, are all too aware of the sport’s sometimes savage cruelty. They finished third in last season’s Isthmian League Premier Division to qualify for the promotion play-offs, in which they merrily thrashed Folkestone Invicta 4-0 in the semi-final before losing to Dulwich Hamlet after extra time and penalties with, in the words of the club’s own match report, a feeling among the players of “abject misery and exhaustion”.

But though misery is never an emotion to be cherished, there is a certain pleasure to be had in sharing it, even if in Hendon’s case it would not be with an enormous number of people – average attendance last season was just 245. It is one reason why the club has decided that in the future they will offer free tickets to anyone “suffering from depression or loneliness or anything similar”, with anyone interested invited to contact the chairman, Simon Lawrence, at his personal email address.

“If anyone comes forward and says, ‘I’m lonely’ or ‘I’m depressed’, the chances are they’re lonely and depressed,” he says. “It’s quite an admission, really quite courageous, to say to people that your life isn’t perfect. It doesn’t cost us anything to do something good.

“Almost certainly, the person who gets the free ticket wouldn’t have bought one anyway but even if they would we lose out to the tune of £11, and I think we can live with that. And maybe somebody is going to come along – there might only be one all season – who watches a game and starts to feel like this is something they might want to be a part of.”

This week Chelsea decided to put a £1bn stadium redevelopment on hold because of the “current unfavourable investment climate”. The plan, similar to that nearing completion at Tottenham, was designed to allow them to attract fans in sufficient numbers and to charge sufficient prices to allow them to compete with the Premier League’s other giants without the endless assistance of friendly bottomless-pocketed oligarchs.

The focus on cash over community is understandable, and probably essential, at the highest level. Further down the pyramid, and particularly for a club such as Hendon, who have been in their own new stadium for only two seasons and are still establishing themselves in the area, those priorities are not so much reversed as totally intertwined.

Hendon’s unusual offer may be intended to assist individuals and to cement their place in their community but it was born of tragedy. Last November Dermot Drummy, one of the club’s greatest and best-loved players, a product of Arsenal’s youth system and later the manager of Chelsea’s academy and their reserves, died suddenly. In April the coroner recorded he had killed himself. Drummy had gone into first-team management at Crawley Town in April 2016 and had struggled after leaving the job 13 months later.


“He was just an all-round good guy, with a really bubbly personality,” Lawrence says. “He was very loved and very well respected. Genuinely I do not understand how somebody could be in such a terrible place. I went to his funeral; it was as crowded a funeral as I’ve ever seen and I think everybody was just completely blown away.”

The idea to offer free seats was the result of a conversation between Lawrence and a volunteer at the club on the day the coroner reached his verdict. Demand may be great or it may be nonexistent but it illustrates an awareness, certainly not unique to Hendon, that a club’s focus on fans cannot entirely be about how much cash can be squeezed out of them. “At Hendon if we were to be remembered not for the cups that we’ve won or the league titles that we’ve won,” Lawrence says, “but for doing some good things in the field of mental health, I certainly won’t be disappointed.”

#17
A slight twist to this thread, I did a good deed and I felt like a better human being after doing so.
I live in the countryside and I saw a elderly couple had broken down outside my house. I went outside to check if they needed to use my phone as signal can be awful here but they said the tow truck would be there within two hours, I then said they could knock if they needed the loo or a drink. About 30 minutes passed and I went to hang my washing out; I noticed how hot it was outside. So I then went and invited them in for a cup of tea and biscuits (cookies if your not British not those odd plain scones Americans call biscuits lol!!). They were both so grateful, and the man said he wishes there were more people like me in the world

#18
Hi, This is a very sweet gesture from a man who worked at Dairy Queen.

#19
Hi, This is sportsmanship at its very best.

Thank you, and I hope you have a nice day.

#20
A fellow forum member on here helped me get the book I wanted.
You must log in or register to reply here.
Share: Pinterest Tumblr WhatsApp Email Link